The first game of the final day of Play-ins action gets underway, but the series is masked in controversy.
As Beyond Gaming was preparing for their match against Hanwha Life Esports, it was thrown into chaos after Riot Games was made aware of an issue with BYG’s mid-laner Maoan and his participation in suspecting gambling-related violations. You can read more about it here, but it made the uphill climb even harder for BYG. Hanwha Life Esports was a tough opponent to have to face, even with their regular mid laner in the roster. Regardless, BYG had to bite the bullet and overcome the challenges presented to them to keep their Worlds hopes alive, while HLE simply had to live up to expectations and take a quick win. Jumping into the first game, it was exactly the start BYG did not need as HLE picked up the First Blood in the bottom lane. It was traded back, but HLE swiftly moved to 1.2k ahead. Shortly after, BYG got a 3v1 kill onto Chovy into the mid lane, before losing two of their own in the bot side. The early game remained close, but HLE maintained their lead and had already picked up an early drake for themselves. At the 19-minute mark, it was all to play for still with a second drake about to spawn.
It’s BYG that pushed to make the 5v5 play around this drake. The fight was frantic, with everyone on low health bars, but it was HLE that came out on top. Winning the fight four-for-two, HLE finally took control of the lead. Almost having the opportunity, HLE tried to take Baron. While the Baron attempt was stopped, HLE found themselves so far ahead that BYG couldn’t hold them back. Using their immense pressure, HLE exposed the top lane inner tower and moved to 8k ahead as they tried once again to claim the Baron.
At this point, when BYG showed up, HLE simply pulled away from it to find a fight. Sadly, BYG just had nothing in the tank to stop them. While BYG retreated, they were sitting ducks for the marauding HLE members as they sealed a quick Game One victory. If that’s anything to go by, this could be a rough afternoon for BYG.
Quick Stats: 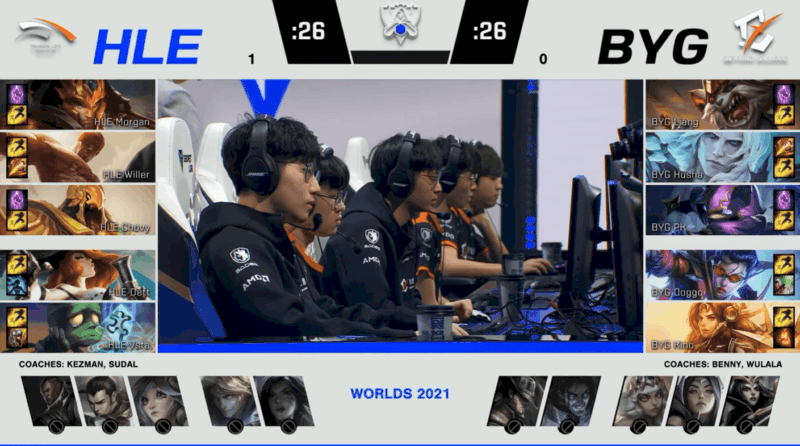 BYG got the perfect start to Game Two, picking up First Blood for Doggo’s Vayne with no death given over in return. HLE did manage to get on the board shortly after on the bot side, even wasting the Teleport of Liang in the process. Though HLE took an early lead, BYG forced kills in the top side before dropping a Rift Herald and claiming the First Tower bonus. Then we got our first early game 5v5, and it was predictably all over the place. BYG looked to have won it early on, but HLE turned it around as they took a delayed Ace.
Shortly after, there was another big series of plays for HLE, who quietly moved into a commanding 6k lead. What little hope BYG seemed to have faded rapidly. HLE burst down the mid-lane thanks to the Rift Herald, and despite Baron not even being on the map yet, HLE knocked down the mid lane Inhibitor as BYG looked out of ideas. BYG looked to have finally found a play to stay in the game, but HLE managed to turn the fight. With that victory, HLE reset as they prepared to finish off the game.
Moving back out onto the map, Baron was easily secured for HLE, with BYG posturing to attempt to stop it. Now empowered with the Baron, HLE jumped on the indecisive BYG. It wasn’t the fight or the retreat BYG needed, and that’s it. HLE moved down the mid lane, picking off the final few members as they took down the base and secured a 2-0 lead in the series.
Quick Stats: Like in Game One, there was another HLE first blood, in what could be the third and final game of the series. It went from bad to worse for BYG, as HLE constantly applied pressure to them and outplayed them at every turn. Eventually, HLE moved to 3k ahead as we approached the 15-minute mark, as BYG desperately tried to hold on. Simply put, it was just more dominance for HLE in this series. And while BYG managed to get a few kills here and there, somehow by the 18-minute mark, BYG had almost lost two Inhibitor towers.
Eventually, Baron was secured for HLE, and while it’s an important objective, there wasn’t a lot on the map for them to take. The mid lane push came down, and with it, the mid and bot-lane Inhibitors. BYG fought back and attempted a pincer play to stay in the series. But unfortunately, BYG couldn’t get the pick they needed, and with Baron on their backs, HLE won the crucial fight and pushed straight for the victory.
HLE cruised to a 3-0 victory, as BYG just couldn’t do enough to stand in their way. Undoubtedly the loss of their mid laner had a huge impact on the day, and it gives the side a lot to think about going forward.
Quick Stats:
Follow ESTNN
Follow ESTNN
Change your language by using these codes: EN, ES, ZH-CN, ZH-TW, DE, RU, KO, BN, DA, NL, TL, FI, FR, HI, ID, IT, JA, JW, NO, PL, PT, RO, SV, TA, TH, TR, VI
21+ | Commercial Content | T&Cs apply | Play Responsibly
© 2021 ESTNN: Esports News Network. All Rights Reserved.