Want to hit 60fps in Amazon’s new MMO? It’s not difficult, but you might want to tweak these New World settings to maintain it
With a peak concurrent player count that shows no signs of slowing down, it’s safe to say Amazon’s New World is making waves. But before you brave the long queue times or even begin to browse the server list, consider adjusting New World’s settings so you can squeeze every last frame from your gaming PC when you finally step foot in Aeternum.
On the surface, New World’s system requirements don’t ask for much. In fact, Amazon recommends a decade old Intel gaming CPU or first generation AMD Ryzen processor, accompanied by a seven-year-old graphics card to scratch your 60fps itch at HD. Although this sounds like a low barrier to entry, this is an MMO and you need to prepare for how busy the settlements can sometimes get – especially as there’s no shortage of people knocking at the door to get in and worlds are constantly full to the brim with players.
Since you don’t have Nvidia DLSS or AMD’s FidelityFX Super Resolution to help with the overhead, you’ll need to turn to the myriad of options at your fingertips if you want to avoid any major dips at a decent resolution.
Here’s a reminder of what your rig needs to pack in order to get started:
New World is a surprisingly slim game for an MMO at just 50GB. Do note that the game only works on Windows 10 64-bit and, much like most new releases, it’s highly advised you install New World on an SSD for the best performance, even if it will work on a mechanical HDD. 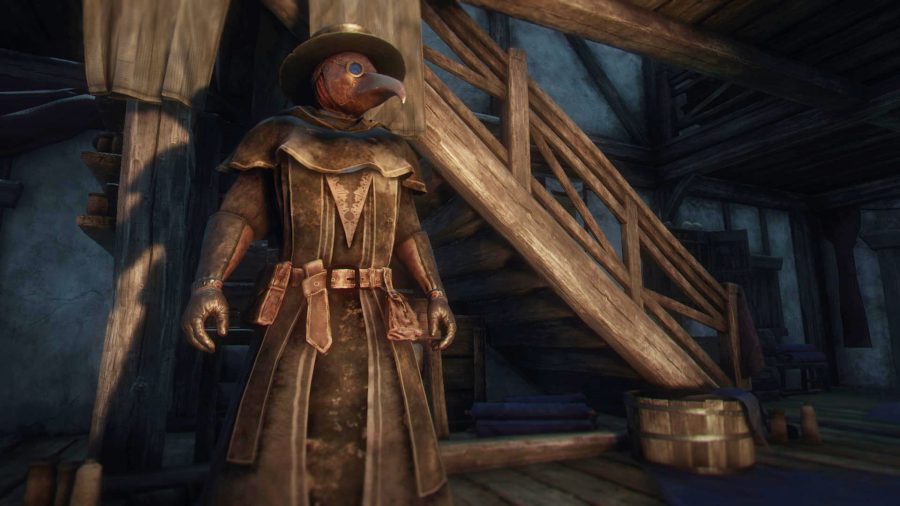 New World has four presets available under the Video Quality dropdown: Very High, High, Medium, and Low.
In other games, selecting a preset would usually give you a mixture of mediums, highs, and lows across the myriad of settings. For better or for worse, however, Amazon simplifies the process by keeping all the settings uniform. If you select High, all your settings will follow suit and it’ll be up to you to tinker with individual settings if you want to optimise things.
It goes without saying that Very High is the most demanding of the bunch and only meant for beefier rigs up to the task. Low, on the other hand, dramatically improves your frame rate by up to 50% by comparison – just be prepared for the trade-off, as it removes New World’s sheen an introduces odd lighting quirks. Needless to say, we’ve avoided low settings where possible to make sure this doesn’t happen. 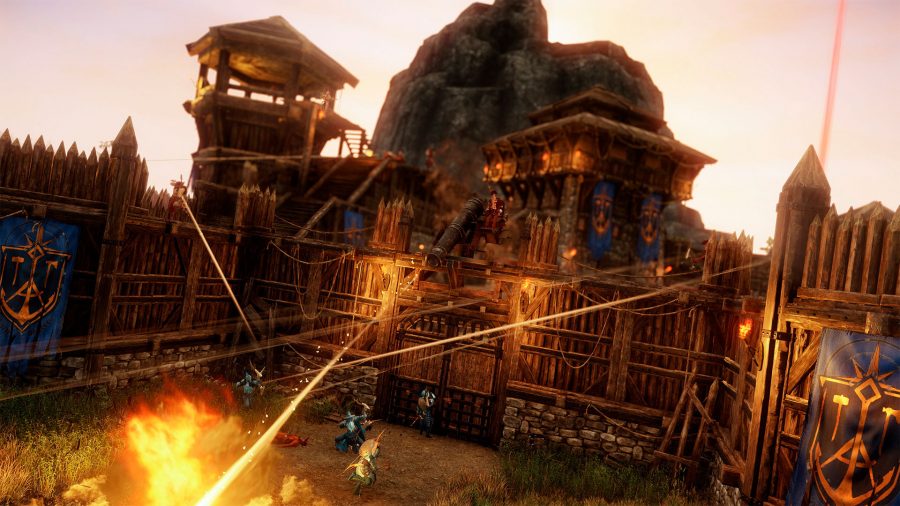 If you plan to chat in-game, the first thing you’ll want to do is check your microphone settings in the Communication tab. The game sets your preferred devices based on your Windows settings, but since even the best webcams tend to take over the default from time to time, it doesn’t hurt to make sure everything’s as it should be. You’ll need to wait until you’ve stepped into Aeternum with a friend to adjust sensitivities and volumes, though. On the other hand, you can disable it entirely if voice chat isn’t your sort of thing.
Audio settings are similarly comprehensive, and you won’t get a good feel for the movie cinematics, sound effects, ambient effects, vocals, voice overs, music, and ambient music until you get into the game properly. You can slide the master volume down to protect your eardrums until then, and set your preferred output configuration depending on whether you’re running the best gaming headset or the best computer speakers.
Then, head into the Visuals tab and consider these New World settings:
Player nameplates have a surprisingly large impact on frame rate, but we can’t say Amazon doesn’t warn us in the description. These give you details of who’s around you and what factions they belong to, but there’s a reason it defaults to 15. Cranking it up to 100 players comes at the cost of anywhere between five to ten fps, but the worst side effect is actually the inconsistency of the frame drops when you enter more populated areas. While there isn’t too much to gain going below 15, reducing it further could help you enjoy the scenery without as much clutter on the screen.
Terrain details is the next setting to tweak if you want to boost fps. This pertains to the surrounding foliage, which you spend a lot of time in, but cranking it down doesn’t diminish the beauty of the game. It does give a couple of frames back in return, though, so it’s worth the trade off.
Texture details reaches far and wide, adding depth to just about everything you see. But what the setting giveth, it taketh away in frame rate. We don’t feel it’s worth cranking down too much given the sharp drop in quality, but you can squeeze even more out if you drop it to medium – just be prepared to lose some of the magic in the process.
First impressions: check out our New World review in progress
Shadow details deal with the shady parts of the game and, as always, can drag the performance down slightly. Going too low starts to make New World look a little less new, so medium is your best bet here.
Dynamic resolution scaling actually goes the furthest to improving your frame rate, but it’s not the golden goose you’d hope for. It uses guesswork to automatically lower your pixel count in certain areas, proactively avoiding frame drops in advance. Unfortunately, it comes at such a sacrifice to visual quality that we can’t recommend it unless it’s absolutely necessary to achieve a good frame rate.
It’s surprising to see effect details, lighting details, and water details not have as big an impact on New World as they tend to in other games, but you could collectively lower them all if you wanted to gain a few more frames. We feel it’s worth preserving the thriving landscape in all its glory if your setup can handle it.
As usual, turning of V-Sync helps keep New World smooth. Leaving it on is a needs must to keep the screen intact for those of you without alternatives, but there’s no reason to use it at all if you have a gaming monitor that supports Nvidia G-Sync or AMD FreeSync.
Get good: here are the best weapons in New World for PvP and PvE
Adding a frame cap can help when New World regularly stutters or loses frames, as it’ll go a long way towards maintaining consistency. Since it’s not a highly competitive game, you don’t necessarily need a triple-digit fps, but the limiter is, funnily enough, limited to just 30fps and 60fps, which won’t suit a lot of you out there with a higher refresh rate. Your PC will thank you to keep the background fps cap on, though, as that helps keep the overhead down when you alt tab out of the game.
Lastly, I’d like to direct your attention to the Gameplay tab, where the much-maligned screen shake setting lies. It definitely won’t help you improve your frame rate, but the option to turn it off is there if you dislike it as much as we usually do. 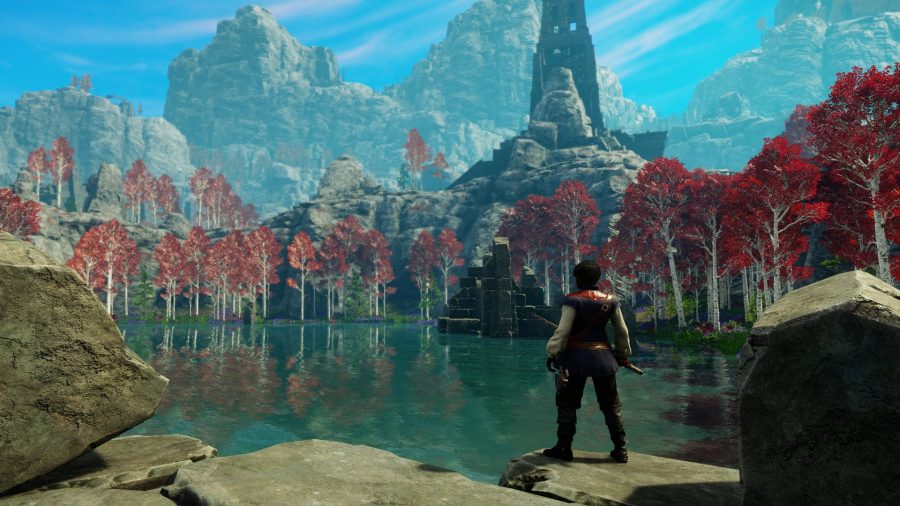 New World has an Accessibility section to help more people play the new MMO. These settings include eight different colour blindness filters (protanopia, protanomaly, deuteranopia, deuteranomaly, tritanopia, tritanomaly, achromatopsia, achromatomaly), text-to-speech, and speech-to-text. You can also adjust the size of the text in New World, but with just two options to select from, it could do with a little improvement if Amazon intends to cater to everyone.
There are other settings elsewhere that could also improve your experience. Within the Communications tab, you can tinker with the chat text by adjusting the font size, fade delay, opacity of the chat window’s background, and even set a language filter to get rid of bad words – although it’s unclear exactly where Amazon draws a line in the sand here. Those of you that are hard of hearing can also boost softer sounds in the Audio tab if you feel you’re missing out on any of Aeternum’s acoustics. 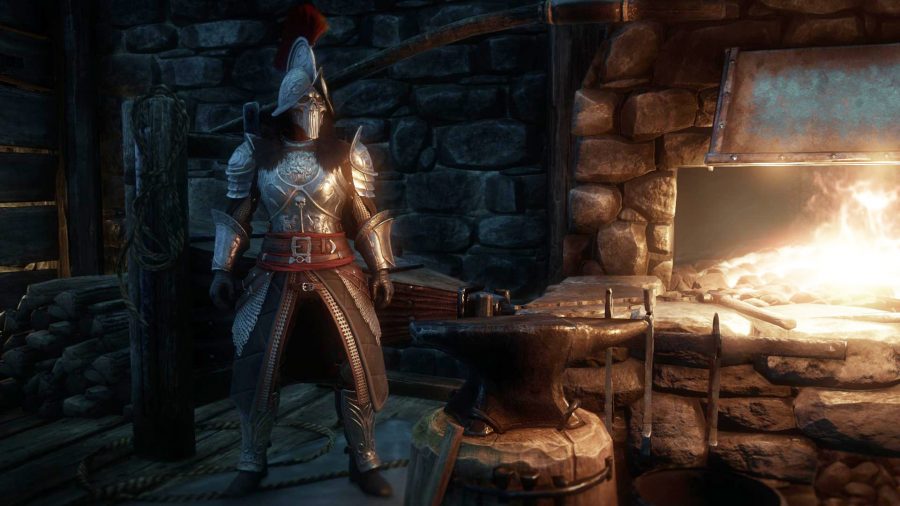 Amazon Games is addressing the exceptionally long queue times with server transfers next week, but that’s not the only thing tarnishing New World’s launch. Much like the problems that plagued the beta, there are once again reports of New World breaking gaming GPUs, as plenty of people take to Reddit to complain that the game borked their hardware.
So far, it’s primarily Nvidia owners posting about the problem, but it isn’t just RTX 3090s that are giving up the ghost as other desktop and mobile 3000 series graphics cards. We’ve reached out to Amazon and GPU manufacturers in hopes they’ll address the fatal flaw, but in the meantime you might want to proceed with caution if you’ve snagged an upgrade through the ongoing graphics card shortage.
A message from the New World Team regarding launch, world queues, and character transfers. pic.twitter.com/wDSrlT8w93
— New World (@playnewworld) October 1, 2021

Fortunately, if you get stuck and want to know where the best New World iron ore locations are or you’re curious how to get fish oil, the MMO is pretty darn friendly with alt tabbing. It only has fullscreen and windowed options, but the former is borderless by default, so your cursor is free to wander without forcing the game to minimise. Better yet, with the background fps cap on, the game won’t eat up many of your rig’s resources while you read.
Get involved in the conversation by heading over to our Facebook and Instagram pages. To stay up to date with the latest PC gaming guides, news, and reviews, follow PCGamesN on Twitter and Steam News Hub, or download our free app for Overwolf.