What must be one of its most requested features of all time is finally coming to the Epic Games Store, and soon. Epic Games has just announced that the rollout of the platform’s brand-new Achievements system, and developer tools that’ll let studios activate them “quickly and easily”, is starting next week.
“Starting next week, you can begin collecting XP by earning Epic Achievements in select games,” the company announces in a post on its site. The Epic spin on Achievements breaks them down into four tiers which are set based on their XP value, with the top tier – Platinum – being awarded to payers who rack up 1,000 XP in a game. The tiers are broken down into the following, along with the “amount of additional XP you get for the Achievement”: Bronze (5-45 XP), Silver (50-95 XP), Gold (100-200 XP), and Platinum (250 XP).
The games that support Epic Achievements get a new page as of this rollout which lets you track and share the progress you’re making in hitting the goals. Additionally, both the Achievements and your progress for each game will now display in your games library on the platform.
It’s worth noting that this new feature is different to the Developer Achievements tooling that the company launched for studios last year, which are “fully owned and operated by developers”. Epic Achievements, coming next week, are more in the vein of the equivalents you’ll see on other platforms, such as Steam, Xbox, and PlayStation, adding “additional benefits for players and bring[ing] them more in line with achievement systems on other platforms”. 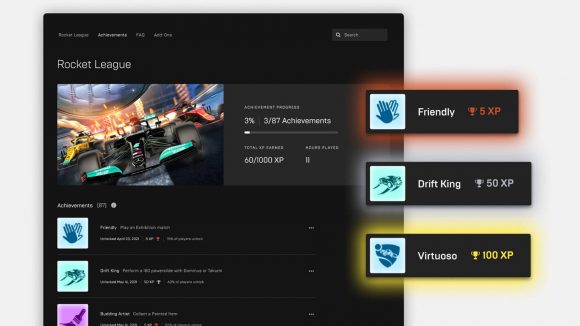 Epic adds that it’s worked with some of its development partners over the past year, which means that some select games will support Epic Achievements the instant the feature launches. These include Rocket League, Hades, Pillars of Eternity, Humankind, Zombie Army 4, and Defense Grid, “and more”.
“We’re working to get these tools to more developers, so you can expect to see Epic Achievements popping up in your favourite games later this year,” the company adds.
For now, check out our lists of the best PC games, free PC games, and upcoming PC games if you’re looking for some inspiration on what to try next.
Get involved in the conversation by heading over to our Facebook and Instagram pages. To stay up to date with the latest PC gaming guides, news, and reviews, follow PCGamesN on Twitter and Steam News Hub, or download our free app for Overwolf.

We sometimes include relevant affiliate links in articles from which we earn a small commission. For more information, click here.
Carrie Talbot News editor
Updated: Oct 4, 2021
Carrie cut her gaming teeth on the early Tomb Raiders and a lot of Worms 2, but has since developed slightly wider interests. An avid lover of cats, coffee, and Fable, she is desperately awaiting Fable 4.